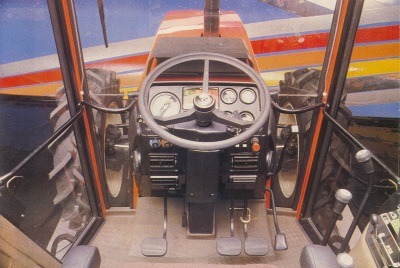 Of the lasers, the 6-cylinder models 110, 130 and 150 were introduced in 1983.
Later, the collection was expanded with a four-turbo Laser 90 and a 5-cylinder
At 100. The new technology for lasers had a 50-degree turning angle,
oil-bath disc brakes on all wheels and crawler steering,
where the front and rear wheels of the same side were braked at the same time. As a turning circle
the steering brake indicated, for example, only 620 cm on the 110 model. There was an all-wheel drive
center axle, 50-degree swivel angle and engaging differential lock.
The transmission was 24 + 12 with a reversing gear and a mechanical quick-change gearbox
equipped.

Much of the same technology was also the most robust Galaxy 170 that was introduced
in the summer of 1983. The most significant difference was the 27 + 9 transmission with a 3-speed
mechanical quick gear. The Galaxy's hydraulics were load sensitive. Laser
and the color of the body of the Galaxy, unlike the previous blue, was dark gray,
apparently because the Galaxy had an air-cooled engine apart
except for the same tractor as the Lamborghini 1706.

Laser and Galaxy remained in production with minor changes for more than 10 years
I drive. In 1992, minor improvements were made to the engines, which
mainly the torque values ​​improved. In the USA, the lasers were sold to Agco
As the Allis 7600 Series.